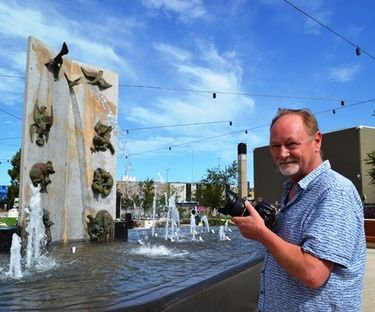 Share this article
Eric Algra is casting his eye over Elizabeth, the place where he grew up, through the lens of a camera.

Eric Algra is casting his eye over Elizabeth, the place where he grew up, through the lens of a camera. His work captures the essence of our community as it passes through a period of transition.

A semi-retired commercial photographer, Eric now lives in Melbourne, but his upbringing in Elizabeth left an indelible mark.

Eric sees our community as a place of adventure, development, hope and achievement – all of which are reflected in his upcoming exhibition ‘This is our town: A snapshot of Elizabeth, a city in transition'.

While the closure of Holden has cast a pall among some, Eric saw the historic moment as an opportunity to produce a photographic art exhibition and book.

“I grew up here and moved away and then when I wanted to study photography the best course I could do was here at Elizabeth at the old TAFE,” Eric told Playford News during a recent return home.

“When I was here a lot, I thought it would be nice to do a photographic portrait of Elizabeth but it took until now and it was the announcement of the Holden closure that inspired it.”

Eric said that recording Elizabeth and the Playford community at a time of significant transition has been a privilege.

“It’s (the work) around people mostly, their experience of having grown up here, those that are still here and how the (Holden) closure might have affected them and how they see their future,” Eric said.

According to Eric, the best part of his study has been meeting interesting people, whose lives were shaped by the same community as he was.

Former South Australian Governor Rear Admiral Kevin Scarce met with Eric for the project, as did Lyell McEwin Hospital staff Margret Arstall and Belinda Edwards, who have been “mates since high school”.

“They studied here, then studied medicine and worked in other places and then came back and Marg, in particular, she’s the head of cardiology at the Lyell McEwin. She wanted to come back to give back to where she grew up, to be involved in the community here, which I think is very inspiring,” Eric said.

Of course, meeting your football heroes is always an enjoyable experience, no matter your age, and the Central District Football Club features heavily in Eric’s work.

“I met John Platten – which is great, because the football club is a big part of Elizabeth and certainly a big part of my growing up,” Eric said.

“I also met Sonny Morey recently, which was a big treat, he’s an absolute gentleman.”

See Eric Algra’s photographic exhibition ‘This is our town: A snapshot of Elizabeth, a city in transition’ at the Playford Civic Centre during SALA (throughout the month of August).

A book featuring his work is also set to be published later this year.