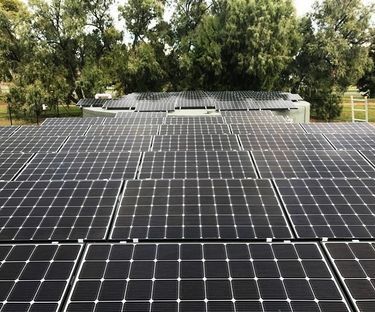 Share this article
A timely decision 18 months ago to dramatically cut electricity use by installing innovative energy-saving technology is paying dividends for the City of Playford.

A timely decision 18 months ago to dramatically cut electricity use by installing innovative energy-saving technology is paying dividends for the City of Playford.

^^ Solar power is helping the City of Playford to cut operational savings. Photo: Sustainable FocusThe multi-technology upgrades are already dramatically cutting energy bills at Playford’s Operations Centre, Civic Centre, the Northern Sound System and aquifer pumping stations in and around our wetlandsThe project was designed and installed by local energy company Sustainable Focus and managing director Rob Smith said these upgrades will save Council approximately $240,000 or about 45 per cent of its energy bill per site.“We achieved this by engineering a mixture of an automated energy management system that includes solar power generation, LED lighting and an energy measurement and control system,” Mr Smith said.

City of Playford Mayor Glenn Docherty said Council has been progressively investing in new energy technology in order to rein in operating costs.“We could see what was happening to electricity prices and we realised we needed to take action to bring operating costs down in order to insure ourselves and our ratepayers against future price hikes,” Mayor Docherty said.The Sustainable Focus system enables energy use to be continually measured and remotely controlled to switch between solar generation and the grid, depending on when the sun is shining. The upgrades include:

A customised LED retro-fit for the existing architectural lighting system – designed and manufactured by Sustainable Focus - which halved the cost of upgrading the Operation Centre lighting;

Several large solar systems, which have been integrated into the building’s power supply and are programmed to act as a demand management tool, as well as an energy generation plant.

A fully-integrated energy automation system which controls mechanical plant, workshop equipment and lighting and enhances the performance of the solar system.

Mr Smith said these upgrades, typically paid for themselves within five years.“By using solar power when the sun is shining and automatically load-shedding power at times of high network prices, Playford will continue to reduce its operating costs,” Mr Smith said.“Individual load shedding at times of peak demand has become a critical tool for organisations keen to shield themselves against fluctuations in power prices and supply.”

^^ The City of Playford's ongoing commitment to best environmental practice has seen it embrace solar power. As a result, Mayor Docherty said Playford is now operating smarter to reduce its overall power bill. "We’re turning off non-critical power during times of high network costs or switching between grid-supplied power and its in-house solar generation," Mayor Docherty said.“We have dramatically reduced our costs, improved work conditions, all in line with our commitment to best environmental practice.”