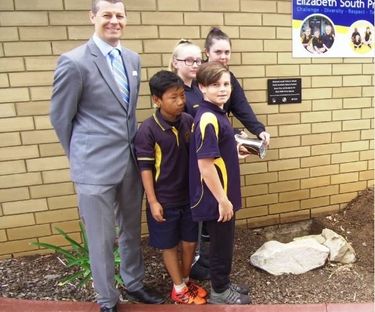 Share this article
Students of Elizabeth South Primary School have become screen stars as a video featuring their thoughts on their school was buried in a time capsule.

Preparing to bury the time capsule were Elizabeth South Primary School principal Steve Clarke and students who appeared in a short film about the school's history. Photo: Dan Schmidt. The video features past and present students of Elizabeth’s first school and is a charming little contribution to South Australian History Festival.

ESPS first opened in 1956 and has remained at its Philip Highway location for the duration of its history.

It started with 90 students and one wooden building as a classroom.

The short film, called Elizabeth South - From the Mouth, was created by local filmmaker Damon Sparkes from the City of Playford’s Northern Sound System, with the support of the Commissioner for Children and Young People and Fatfish Films.

Current students interviewed old scholars who went to Elizabeth South Primary in the 1960s and beyond.

Christopher Tyndall recounted to current student Jymain O’Neill how students of his day used to write with an ink and nib.

A screening of the film occurred at a morning tea and a YouTube link to the film was buried in a time capsule that is to be opened in 50 years.

Among items included in the capsule were drawings of the school and other mementos from current students.

View the Elizabeth South - From the Mouth video embedded above or visit Youtube to watch the time-capsule being buried after a school assembly where the short film was shown.