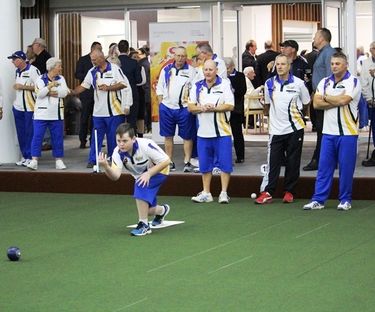 Share this article
The City of Playford’s world-class lawn bowls facility is officially open for business.

The City of Playford’s world-class lawn bowls facility is officially open for business.

Approximately 200 people attended the reopening of the $7m Goodman Road facility at Elizabeth, with members of the merged Elizabeth and Munno Para bowling clubs celebrating a new beginning.

“This development has also supported the creation of jobs and future-proofing the role of sport in our region,” Mayor Docherty said.

“As the City of Playford continues to grow at such a rapid pace, it is wonderful that our growing sporting facilities make Playford a fantastic place to live, work and play.”

The former presidents of the merged clubs each spoke of the successes their new club has experienced.

“There were many healthy debates and many sleepless nights,” former Elizabeth president Jim Main said.

“But, it has all been worthwhile, with what we have today.”

“Personally speaking, I now have twice as many friends in the club as I had before and I think most members would feel the same,” former Munno Para president Steve Attridge added.

“When coming here, you have expectations and visions in your head as to how the facility’s going to look and I’ve got to say it totally exceeded those expectations,” Glasson said.

“It is world class and I’ve had the great privilege of travelling all around the world, from the bottom of Tasmania to the north of England and Scotland and many places in between…again, I congratulate you all.”

The Playford Bowling Club is part of the Playford Sports Precinct, also featuring the Central District Football Club, Aquadome, Adelaide United Football Club training base and Playford Tennis Centre, as well as other facilities across Council.

The official opening crowned off a debut season for the Playford Bowling Club that saw it claim three pennants.

To get involved in lawn bowls, visit Playford Bowling Club on Facebook, or ring 8255 1895.