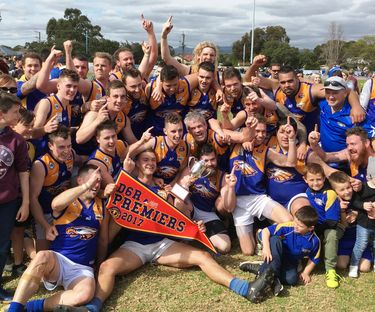 Share this article
Central District’s dream run ends, Elizabeth’s Ben Clark lives out every footballer’s dream to take his team to a flag and all eyes are now on the Adelaide Plains in this week’s edition of the Northside Finals Footy Wrap.

Central District’s dream run ends, Elizabeth’s Ben Clark lives out every footballer’s dream to take his team to a flag and all eyes are now on the Adelaide Plains in this week’s edition of the Northside Finals Footy Wrap. ^^ Elizabeth Football Club's premiership-winning reserves side. Photo: Rob McLean Central District ran up against a classy Sturt in Sunday’s SANFL first semi-final, losing by just seven points in a tight contest.

Sturt got into the game faster, breaking away to a lead before Josh Glenn bullocked his way into the contest to kick the Dogs’ opening goal.

Each quarter started much the same way, with the reigning premiers asserting their authority and then Centrals firing back to within a kick of their opponent.

Sturt went into the final term with a two-point lead and booted an early goal to put the pressure on Centrals to come back – they weren’t quite able to do so, in what was a game of inches.

Glenn finished with three goals, in another excellent performance, while John Butcher also booted a trio of majors. Defenders Ryan Llewellyn and Luke Barmby were also in the best.

The semi-final loss sees Centrals finish fourth, after, at one point, appearing to be in a battle to avoid the wooden spoon.

Elizabeth’s division six reserves side won the club’s first senior flag in a decade when it defeated title favourites Pulteney in a heart-stopping contest at Edwardstown – a goal just before the siren to Dan Clark putting the Eagles in front.

Pulteney, which finished with 17 men on the field after a player was sent off, had the lead for much of the match and will rue missed shots on goal in the final term that could have secured the premiership.

Ruckman Peter Furber dragged the Eagles along as they came from two goals down late in the game, while Matthew Daniels and Jarrod Hall were also influential.

With just minutes to go, the ball was locked in Elizabeth’s forward line and a scrapped kick landed in the outstretched arms of Clark in the goal square.

The full forward kicked his second goal of the match and his 99th of the season, prompting celebrations as the Eagles hit the front.

The siren sounded before the restart and Elizabeth had pulled off the ultimate football heist.

^^ Elizabeth's Ben Clark lines up for the match-winning goal.

Meanwhile, earlier, Elizabeth fell at the final hurdle in the C6 grand final, losing to Payneham Norwood-Union by 12 points.

The Eagles were always a chance against PNU, with the match’s margin never more than three goals.

The first Playford-based side in action in the Adelaide Plains Football League preliminary finals on the weekend was Virginia’s senior colts, and they had a comfortable 41-point win against Two Wells.

After a tight first half, the Rams broke away, keeping their opposition to just one goal.

Jordan Cotsano scored the Owls’ two goals, both in the last half, while Jarell Lampard was their best player.

Playford-based sides playing in this week’s Adelaide Plains grand finals are Virginia, which will take on Mallala in the B grade, while Angle Vale will play the Rams in the senior colts.