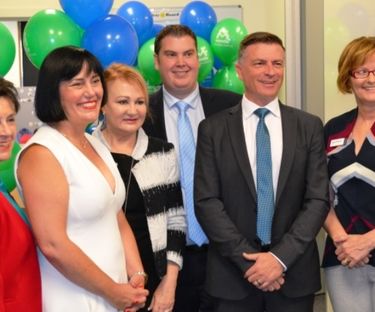 Share this article
With the introduction of the National Disability Insurance Scheme just around the corner, the City of Playford welcomes service provider Minda to the northern Adelaide community.

With the introduction of the National Disability Insurance Scheme just around the corner, the City of Playford welcomes service provider Minda to the northern Adelaide community. ^ The official opening of Minda's Elizabeth office. Photos: Rob McLean

The launch of Minda’s new Elizabeth-based office was held on Wednesday, with the organisation set to provide significant support for northern-suburbs residents.

The service provider, one of several organisations supporting the 14,000 people living with disability in the north, has mostly been based in southern Adelaide in the past, but the soon-to-be introduced NDIS means there is increased demand for support in this region.

With the City of Playford among the first regions in which the NDIS will be rolled out, Mayor Glenn Docherty welcomed the service, which will be among the services offering support to the estimated 5000 people living with disability living within the Council boundaries.

"Minda has a great new facility in the heart of Elizabeth, meaning that those who need to access NDIS services can now do so in an easy-to-access location,” Mayor Docherty said.

"I congratulate Minda on setting up NDIS services in our community." ^ City of Playford Mayor Glenn Docherty (centre) was among a number of northern mayors and elected officials to attend the launch.

“With the National Disability Insurance Scheme, the amount of people eligible for the services is going to expand and we need to be able to provide a supply of service to meet that increased demand and the increase in workforce requirements,” Ms Miller said.

Minister for Disabilities Lisa Vlahos officially launched the new service and said it will make a huge difference in the community.

Minister Vlahos, whose electorate, of Taylor, is part of the northern catchment area incorporated by Minda, congratulated the organisation on its vision to service a new area.

“I’m delighted to be here to…celebrate the opening of the Minda northern office,” Minister Vlahos said.

“The establishment of this office in the northern suburbs is a very important step and has been long planned and part of the long-term vision of Minda and it’s exciting to see it become a reality.”

The rollout of the NDIS is expected to cover all of South Australia in all age groups by July 2018, doubling the disability sector in this state.

Minister Vlahos said the State Government is contributing $723 million funding towards installing the NDIS, which will create $1.5 billion in spending in South Australia, as well as providing 6000 more jobs.

Are you ready for the NDIS?