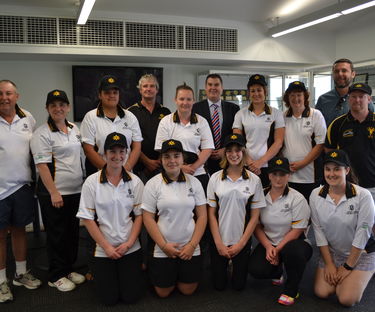 Share this article
A new generation of young sportswomen are being encouraged by the cricket players of today.

As the growth and promotion of women’s sport continues, it has driven cricket to the highest participation rates of any sport in the nation.

In 2015-16, women’s cricket grew nine per cent to 314,936 players and among those leading the charge is the Angle Vale Cricket Club.

The presentation took place prior to Monday night’s Para Districts Cricket Association match against North Pines, which the club won by seven wickets.

“Why Playford Council supports women’s sport, in particular, is to see women having a go in our community,” Mayor Docherty said.

“A few years ago there weren’t many opportunities for women to give non-traditional sports a try.

“Angle Vale, through its cricket and football clubs, is a great place to do that.”

With the sporting landscape changing, due to the growth of the Women’s Big Bash League, development of a women’s AFL competition, ongoing W League soccer and the reshaped National Netball League, Mayor Docherty said today’s sportswomen are playing a key role in inspiring tomorrow’s talented juniors.

“I look forward to seeing every success you have and I’m sure in the not-too-distant future we will see some players in the Australian women’s cricket team,” Mayor Docherty said.