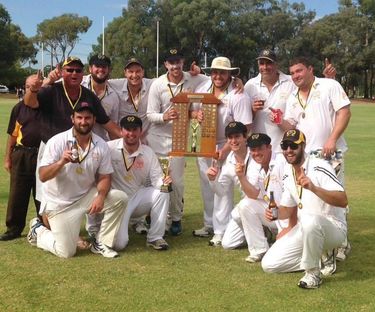 Virginia was defending 220, which in the furnace of a grand final was a challenging target – and so it proved, with the Tigers dismissed for just 99 in their run chase.

Virginia captain Shaun Lay was, unsurprisingly, delighted by the win.

“I haven't wanted something any more than this today,” Lay said on Facebook.

“Virginia CC have taken me in and given me the opportunity to captain these legends today to a premiership!”

At 2/61, Salisbury West was right in the game, but then in walked Natsias.In his fourth over, the veteran got the crucial breakthrough to dismiss equal top-scorer Justin Davies (27) before having the Tigers’ in disarray, removing Anthony Lewendon and danger man Travis McIntyre to complete his hat-trick.

It didn’t take long before the match was completed, as West lost more wickets in batches.

Nathan Warren took the last wicket to complete the rout and begin the celebrations.

On Saturday, Virginia heaped pressure on the hosts by putting runs on the board.

Ashley Nicholas (65) scored the only half-century of the match, while Lay (25) and Anthony Bascombe (39) set the train rolling with a 60-run opening stand.

The result turned the tables on last season’s result, which saw Westies defeat the Rams.

The premiership is Virginia’s first since 2013/14, a grand final in which it beat Salisbury West. ^^ Johnny Natsias (left) and Ashley Nicholas celebrate their roles in Virginia's cricket premiership. Photo: Facebook Other results: