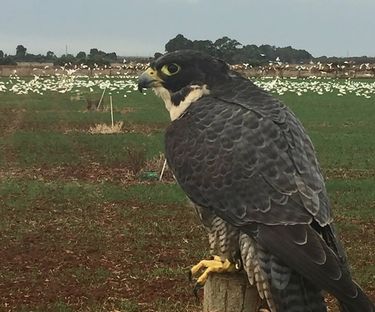 Share this article
You may be aware the City of Playford has employed two Peregrine Falcon, Ziggy and Lucy (and their handler) to manage the corella flocks in our area.

You may be aware the City of Playford has employed two Peregrine Falcon, Ziggy and Lucy (and their handler) to manage the corella flocks in our area.

During a ‘normal’ flocking season, corellas fly in, graze, play, pair off and, when the weather cools, fly back to their breeding grounds to mate.

This year, due to excellent crops and ample food supply, their population has exploded and they’re very late moving on.

Playford is ideal for them. Due to our numerous wetlands, ancient gums, grasslands and open spaces, they’re thriving, and reticent to move on – they are not here because they have been pushed off land elsewhere by housing development.

In Playford, it’s estimated the birds have caused nearly $60,000 worth of damage to public property.

Why are we using falcons?

Large corella flocks are notoriously difficult to move along, and many scare techniques have been tested.

Noise makers (like gas guns and clappers) work for short term, but the corellas are clever, and start associating the boom of gas guns with food supply - since the guns are usually employed to protect crops - so this technique can actually increase the flocks to an area.

Falcons, however, are a natural enemy of the corellas.

When falcons are near, a deep primal fear is triggered in the corellas and they’ll move along to avoid becoming prey.

This makes the falcons a great, environmentally-friendly deterrent.

Where do the corellas go?

In normal seasons, there would be ample land and good hollows to support the corellas in their traditional Adelaide Hills breeding grounds.

This year, the health and size of the population means the corellas are sprawling across more territory.

As they’ve commenced their pairing off, we’re hoping the timing (late in the season) will encourage a return to their natural behavioural cycle and to their traditional breeding grounds.Results so far…

We have had numerous reports the corellas are moving from ‘favoured’ areas in Playford, and we are optimistic Ziggy and Lucy’s work will have a long-lasting effect.

Please let the City of Playford know if you see large numbers of corellas in your area by contacting our Customer Care Team (8256 0333).