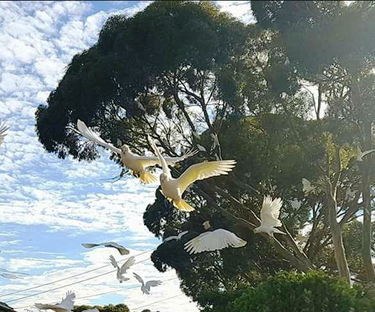 Share this article
The City of Playford is engaging in a corella population management exercise, here are some key details regarding these measures.

The City of Playford is engaging in a corella population management exercise, here are some key details regarding these measures.

The little corella are the most naturally inquisitive, intelligent, playful, (and destructive!) birds.

We've planned our landscapes and wetlands in Playford to be inviting to Australian birds and wildlife, and we're proud our natural surroundings, open spaces, and native trees and bush land attracts the corella.

While we are currently having issues with the corella population-size, and the extended time they’re staying, we fully expect to welcome them back next year and into the future.

Playford is in the migratory corridor for little corella, which spend several months a year here in summer (usually between December and March) during their flocking season.

They historically arrive in flocks of 20 to 30 to forage for food, roost, play and flock with their bird community, only now we are seeing them in their hundreds and thousands.

Why are there so many Corella in Playford now?

The corella population 'problem' is only recent (since 2017), following stellar breeding and ample food supplies in the 2016 cycle, and their population boomed.

We are now seeing greatly increased flock sizes and extended stays until July – much later in the year than their normal cycle.

The increased population and the extended time in Playford increased the damage these flocks naturally create, and we now have to consider population-management initiatives.

Why do we need to control them?

The corella damages our native environment, crops, public and private property, and they pose a potential threat of overwhelming other native species, including other birds.

Some of the damage includes:

Digging up newly planted crops and existing crops of almonds, vegetables, fruit, and horticultural gardens, as well as irrigation systems;

Damaging telecommunication and lighting towers by chewing through cabling; and

Creating excessive noise at night roosts, making it difficult, if not impossible, for nearby residents to sleep.

What are we doing about it?

If we do nothing it will encourage the extremely large populations to stay and breed, which will lead to more problems, complaints and less chance of being able to manage the problem.

After consultation with the state environment department, we are managing the population with non-lethal means (noise deterrents, and birds of prey), to return them to their ‘normal’ migratory pattern; and

At this stage, we have no intention of culling, but we do need to manage the population to mitigate the damage.

What devices will the team use?They use a range of devices such as:

What impacts will this have on corellas, other native birds and pets?

The measures are targeted only on flocks of corellas, which have memory imprints of sounds associated with lethal action.

Other bird species have minimal association with the sounds (which are only activated in short bursts and not continuous) due to not having been part of massive flocks.

It is recommended you keep nervous dogs inside during this period, the sounds will be similar to cars backfiring;

The sounds will be aimed towards flocks sitting in open areas and not towards homes, unless this can’t be avoided.

This method is aimed purely at flocks of corellas and not other bird species (including those in aviaries).

If you are concerned for your birds, it is recommended you place a canvas cover or blanket over your cage or aviary on the day the teams will be in your location.

How will the team be selecting areas to work in, and will they follow the dislodged flock, or select new flocks each session?

Areas of works are major roosts and congregations; and

The flocks are rounded up, unsettled and followed.

Where will the birds go?

The idea is to discourage the birds from roosting in the same spot and encourage them to return to their breeding ground in the Adelaide Hills and surrounds;

There are only two options – either leave them where they are, allowing an increase in their numbers or encourage them to return to their home base;

This must be accompanied by other passive management action, such as watering at night-time and reducing food sources;

These birds pick their roost site based on the presence of a suitable perch, turf grasses, a known site for water or previous roosts known to be safe; and

They will not randomly select farmland or any backyard.

Call our Customer Care team (8256 0333) to report bird sightings or request an assessment of your neighbourhood.