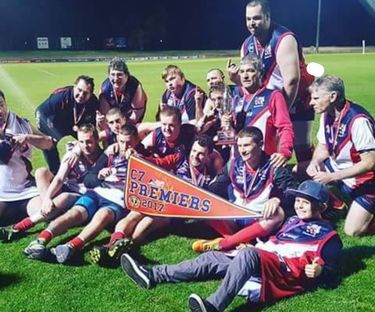 Share this article
The Eastern Park Football Club’s commitment to developing an outlet for footballers who have a disability has seen it nominated for a significant award.

The Eastern Park Football Club’s commitment to developing an outlet for footballers who have a disability has seen it nominated for a significant award.At the commencement of the 2017 football season a group of all-abilities footballers were homeless, with no club to represent.But then the EPFC stepped in to support the players, who compete in the Adelaide Football League’s C7 competition, and give them a new home at Dwight Reserve.The club, which had never previously been involved in all-abilities football, ensured the players were welcomed and provided with guernseys and all of the facilities to which other players had access.And the Demons were handsomely rewarded when the team won the C7 premiership. Coach Marc Lewis said winning the grand final, defeating Kenilworth by 33 points, was the season’s pinnacle.However, he said the biggest highlight was the club’s positive attitude towards the players.“My players were aiming all year to win a premiership for Eastern Park because of the way the club had embraced them,” he said.“The players had never had anything like that support as footballers before – the club really looked after them.“Now I’d like to see another team for all-abilities footballers out here in Playford, as there are plenty of players who could benefit from being able to play the sport."

Among the premiership stars were:

A young player with a phobia of footballs who took to the field every week and even kicked a goal.

A 59 year-old man who had played 200 games for the Demons, before a serious injury in which he lost his hearing stopped him from playing - until he found this outlet.

The team’s best and fairest Anthony Landolfi has an intellectual disability and is a star player.

Club football director Craig Wilson said the Demons’ newest team, developed in a season in which the club also fielded its first women’s outfit, provided a massive positive.“We were very conscious to ensure we did things the correct way. It was important to be all-in and include the players in every aspect of our football club,” Wilson said.“It’s educated a lot of our people about the need to support this team and embrace them as well.”The C7 success has seen the club nominated for the annual City of Playford International Day of People With Disability Awards.The awards will be presented at the Celebration of Ability event to be held on Thursday, 7 December, with nominations celebrating people who lives, works or plays within the City of Playford. Awards are presented for:

For further information, view HERE or contact Janine Anderson (8586 0224 or janderson@playford.sa.gov.au).To nominate yourself or someone else, enter HERE.Nominations are now open and close on 27 October, 2017.