Christopher's smile lights up the room 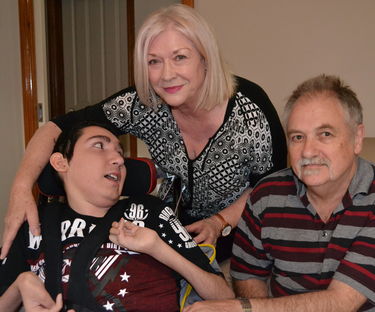 Share this article
Sometimes in life you meet special people.

Sometimes in life you meet special people. Meet David and Janice Williams and their foster son Christopher Graham. ^ Christopher Graham (left) with Janice and David Williams. A massive smile rolls across Christopher Graham’s face as he looks at David and Janice Williams; there’s so much love in that grin it’s hard not to respond in kind.Christopher, 17, has plenty of reasons not to smile: he has debilitating cerebral palsy that confines him to a wheelchair and which has seen him in hospital eight times this year alone.But, there it is, a smile that says all you need to know about Christopher’s relationship with his legal guardians, David and Janice – an enduring bond of trust and love.The Smithfield couple took Christopher on a decade ago, when he was just seven, after his father, his primary carer, started finding the going tough.“To be fair to his dad, he was doing a really good job with Christopher, but it got to a point where it got too much for him and he really was starting to struggle, which made it worse for Christopher,” Janice said.So, the couple took on parental rights and have never looked back.“It’s a tremendous responsibility,” Janice said. Challenging roleChristopher is not the first young charge the pair, who between them also have five of their own children, has taken on.Previously, they had cared for Robbie Graham, a distant cousin to Christopher, for 12 years, until his death.There are clearly many challenges when looking after young men such as Christopher and Robbie, but, according to David, there are just as many rewards.“For anybody involved, there are great rewards for looking after children like this…they are truly special,” David said.Although they don’t seek external rewards, David and Janice were recently honoured at the City of Playford’s Celebration of Ability event, receiving a Community Service Award.And while it was nice to receive such acknowledgement, behind all of the plaudits, there is a sense of sadness about the reality of Christopher’s life as his conditions take their toll.“When we first took Christopher on, I thought our main worry would be, given our age, where he would go if it got to the point where we couldn’t take care of him,” Janice said.“But now, we’re really worried about his health issues.”Of late, Christopher has become very well-known at the Women’s & Children’s Hospital and Janice said the team of doctors and nurses that looks after him are doing an amazing job.But through it all – the pain, treatments and injections - that smile remains intact.“This kid, he has the most amazing sense of humour,” Janice said.“He finds some people absolutely hilarious and never stops smiling. He’s just beautiful.”

If you’re interested in taking on a role similar to David and Janice, contact Cara, an organisation which works with children and adults with disability to learn, grow and have fun.

He gets right into football, supporting the Adelaide Crows and Liverpool.

He’s a big fan of Hairy Maclary, as narrated by David Tennant.