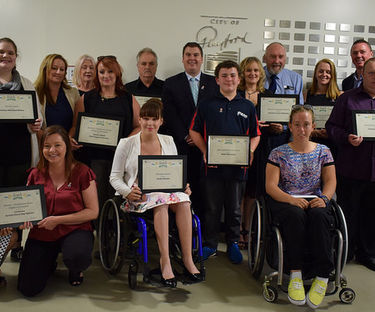 Share this article
&nbsp;The City of Playford acknowledged&nbsp;International Day of People With Disability by celebrating ability.

Photos: Roxanne Withers. The City of Playford recently held its Celebration of Ability event to celebrate International Day of People With Disability.

Significantly, six International Day of People with Disability Mayoral Awards were presented to mark the occasion.

The City of Playford Mayor Glenn Docherty presented the awards as part of a night of fun and entertainment held at the John McVeity Centre.

“Tonight, as a community, we will celebrate the abilities and valuable role that people with disability play in the City of Playford, as well as recognising their achievements and contributions.”

The theme for this year’s International Day of People with Disability is ‘Achieving 17 Goals for a future we want'.

The United Nations-sanctioned annual theme provides a frame for considering how people with disability are excluded from society by promoting the removal of all types of barriers; including those relating to the physical environment, information and communications technology (ICT), or attitudinal barriers.

“These themes support our aim here at the City of Playford to be a community that is inclusive, sustainable and accessible for all,” Mayor Docherty said.

“We strive to be a community that values diversity and celebrates the gifts, strengths and abilities of all its members, creating a vibrant, resilient and cohesive community.”

Paralympian Jocelyn Neumuller was guest speaker for the event. Did you have your photo taken on the night? Award winners:

Christopher Hewish (Personal Achievement Award) Until recently, Chris was a quiet, isolated young man, his anxiety prevented him from making friends, going out or trying new experiences. This affected his well-being and health.

The Personal Achievement Award recognises Chris’ keen commitment to change, which has seen him emerge as a leader in his peer group and a well-known community member who independently shops, socialises and manages his own health, which would not have been possible a short time ago. Northern Carers Network (Business/Employment) Since 1995 Northern Carers Network, as a not-for-profit organisation, has provided support to carers residing in Adelaide’s north.

Northern Carers Network provides service to people who have a disability, those who are aging, people from diverse backgrounds and to young carers.

As with most service providers in the area, Northern Carers Network has been working in the NDIS space to enhance existing services such as respite, participation in community, assist with daily personal activities and household tasks.

The value of such a service is personified by participants who say the program “changed their life”, demonstrating, in part, the outstanding and continuous services delivered.

This year, Emily was nominated twice in several categories.

Emily demonstrates her commitment to a bright future by undertaking representative roles on various committees and reference groups, including the City of Playford’s Youth Advisory Committee and the NDIS Youth Advisory Group.

Emily is committed to providing information to people across our community by being a guest speaker at disability forums.

As her self-esteem has grown, Emily has also been sponsored by the Rotary Club of Playford to attend a youth leadership award camp, where she spoke on diversity and perseverance.

Currently completing her SACE at Northern Adelaide Senior College, Emily is vice-president of the school organising committee and is on the school’s governing council.

Noah Shoumack is 13 years of age and has already represented South Australia in judo.

Three years ago Noah found it very difficult to participate in organised sports, but since being introduced to judo, Noah’s family and friends have seen his self-esteem and confidence grow in leaps and bounds.

Noah proves that no matter how many obstacles you face, that persistence, passion and the right supports mean you can do just about anything.

David and Janice are recognised for opening their home and dedicating their time to fostering children who have a disability requiring 24/7 support.

Neither David or Janice seeks recognition for this role and were nominated due to their selflessness and dedication.

They have had recent challenges, including damage to their modified vehicle in an accident, and managing the ill health of one of the boys in their care.

However, David and Janice rarely take time out for respite and prefer to spend their time providing positive opportunities to the children for whom they have care.

They provide an exceptional community service in supporting children whose opportunities may be limited without their selfless support.

Without community pressure, the Elizabeth City Centre, this year, installed an adult change facility – this facility will provide individuals who need it the opportunity to meet their personal needs in a way that is dignified, hygienic and safe.

This project demonstrates Elizabeth City Centre’s commitment to inclusion and equity and has afforded people with disability the opportunity to participate in a community without forced restrictions.