CBD of the North: A bold and progressive vision 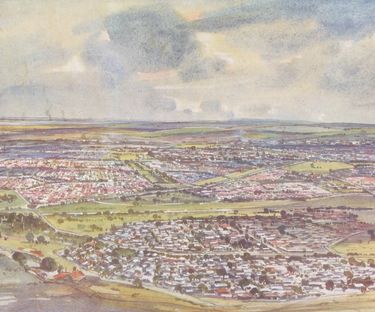 Share this article
The City of Playford is currently developing the CDB of the North at Elizabeth.

The City of Playford is currently developing the CDB of the North at Elizabeth. While it is a bold and progressive plan, the current push reminds us of the foresight and vision that saw this community first created.

^ Anton Riebe's interpretation of the City of Elizabeth before construction commenced. The birth of a new city, generations ahead of its time is being created on unused land. With open spaces, provisions for our technical age, parking areas, suitably located places for business and attractive shopping centres, this land is rapidly being turned into a modern city.

It is a venture that only imagination, hard work and some audacity could bring to fruition.

The City of Tomorrow.

You may be thinking this description sounds like the City of Playford’s Next Great City project currently under way adjacent to Elizabeth’s Civic Centre.

But, in fact, what is described is the idea for the development of the town of Elizabeth over 60 years ago.

In 1950 the South Australian Housing Trust called for a “bold plan and decisive forward planning for the needs of the increasing population of the future”.

In planning the city, much thought was given to the future and the community’s development was controlled so it did not grow haphazardly, ensuring a clear decisive line between the residential and industrial areas.

A quarter of the land was set aside for parks, gardens and sports fields, providing plenty of space for leisure and beautification.

Roads were carved out of dirt to allow access for deliveries of building material and goods for the shops.

The new residents were given the challenge of breathing life into the city.

We have given you bricks and mortar but it’s up to you to make a home.

We can provide a house for each man and his wife but it’s up to you the people to give this town life.

Take the reins we have given you, we’ll be at your side.

The town became a city, where its residents formed an extraordinary sense of belonging.

Back doors were not locked, so children could come and go, and the neighbours were all known and socialised with.

Civic pride generated dozens of community clubs, many of which are still running today, that kept residents actively engaged.

Then, as with today, staff invested heavily into the concept determined to see it come to fruition.

The South Australian Housing Trust and the people of Elizabeth were very fortunate to have Alex Ramsey and Vic Barrell of the SAHT.

They were men of foresight, and they gave of themselves untiringly.

Today, the City of Playford is again investing energy and foresight into a project that will see the northern community look to the future with pride.

The $35 million ice sports arena and the $20 million medical facility that are two of the projects that have been announced are being developed by investors who have a belief in this community and its future.

They are not just investing in buildings, but by creating important employment opportunities they are also investing in our community’s future.