BUSTED: Think you can get away with dumping in Playford? Wrong. 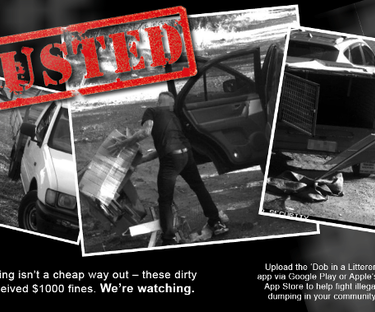 Share this article
Around 34,000 tonnes of kerbside rubbish will be collected this financial year in the City of Playford.

Around 34,000 tonnes of kerbside rubbish will be collected this financial year in the City of Playford. Unfortunately, we also anticipate a bill for $1 million to pick up rubbish illegally dumped within Council’s boundaries.

While some people say the cost of correctly disposing their rubbish contributes to their decision to illegally dump their waste in Playford’s reserves and roadsides.

But that’s no excuse, as so much of what is dumped in our community can actually be disposed of at NAWMA for free: • E-waste (anything with a cord)

• Paint tins. NAWMA is open seven days a week – so if people really want to do the right thing, they can do so every day of the week for free.

If you spot someone doing the wrong thing, you can help us keep our community rubbish free by reporting it via the EPA’s ‘Dob in a Litterer’ app, which you can download to your phone via Google Play or Apple’s App Store.

The City of Playford now uses CCTV to monitor known dumping sites within our community – meaning people who do the wrong thing can be caught and fined.

The cameras are located around the City of Playford, in both rural and urban areas, and are used to obtain footage to catch illegal dumpers, whose hip pocket can be stung by up to $1000 and who will be liable to prosecution of up to $30,000 or six months jail, or more if a company is dumping.

Under the newly introduced Local Nuisance and Litter Control Act it is now easier for offenders to be prosecuted.

Through the use of CCTV cameras, the City of Playford has caught three dirty dumpers, each of whom have been fined $1000 – an expense that could easily have been avoided. Further reading: Dob in a litterer Cameras target illegal dumping