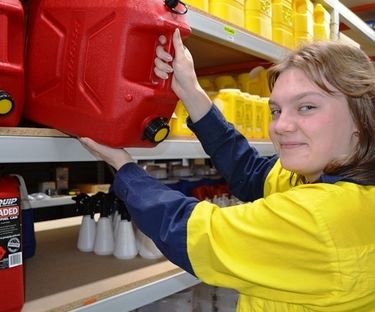 Share this article
Women have been breaking the glass ceiling in the workforce for many years now, and at the City of Playford a larger-than-ever cohort of ladies are breaking the ‘grass ceiling’ through employment in our outdoor teams.

For Teagan Mickan, the City of Playford was a much-needed employment oasis after she struggled to secure work upon leaving Gawler & District College.

The One Tree Hill resident applied for numerous jobs but was unable to get the nod, until gaining a traineeship with Playford in January this year.

Based in the stores at Council’s operations centre Tegan enjoys her job and is excited to see more women breaking career stereotypes within local government.

“I’m quite happy to see that girls are starting to get their hands dirty, particularly young women,” Tegan said.

“The stereotype of young women these days is fashion and selfies, so it’s good to see them breaking the mould.”

“I’ve really enjoyed being welcomed into what has been a male-dominated environment,” Jasmin said.

Since beginning with Playford, Jasmin has been involved with parks and gardens maintenance across the community, along with irrigation and park furniture repair work, and has also gained her truck licence and is hoping to gain loader operations qualifications.

To learn more about working at the City of Playford, click HERE.