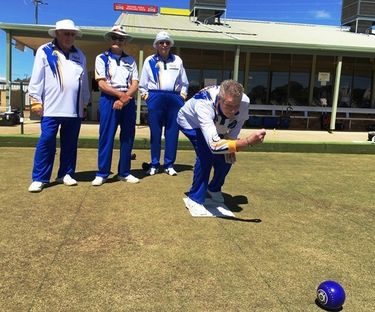 Share this article
The biggest shade structure for a bowls centre anywhere in Australia is to be built at Goodman Road, Elizabeth.

The biggest shade structure for a bowls centre anywhere in Australia is to be built at Goodman Road, Elizabeth. ^^ Playford Bowling Club members John Harrison (left), John Osborne and Derek Barradell look on as Ralph Anderson sends down a bowl. Photo: Rob McLean.

The City of Playford facility will be one of the best in Australia and will become a big sporting drawcard.

But it’s what will happen beneath the shade structure that has been the focus of two local bowls clubs that joined forces ahead of the centre’s scheduled opening in March 2018.

Munno Para Bowls Club and the Elizabeth Bowls Club members have worked with the City of Playford towards an amalgamation that saw the formation of the Playford Bowling Club.

The new club has already started playing under the new name and new uniform.

While the players acknowledge there was initial trepidation, former Elizabeth player Dean Glover said members are now focused on the advantages the merger will bring.

“We will attract new members and more tournaments and we will also attract members back. We will have a better club because of the facilities,” Dean Glover said.

“Being able to play all year round will make a big difference. We’ve had so many games cancelled because of the weather.

“Playing in a new facility that is world class is something exciting."

“This facility will give us more depth and strength. Everyone understands it’s for the best,” he said.