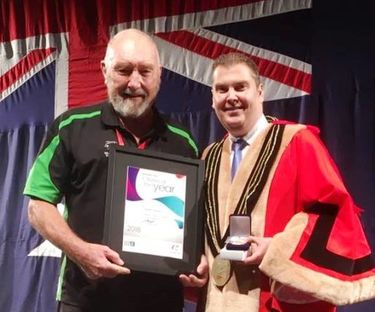 Share this article
The Playford Citizen of the Year Award was announced at the Playford Civic Centre this morning, with Bob Lamerton receiving the honour.

The City of Playford’s Citizen of the Year is Bob Lamerton, of Waterloo Corner, a volunteer with The Northern Carer and Playford Rural Support Group, the Virginia Institute and within the greater Council area.

Bob is known for his ability to help anyone and everyone and regularly supports the residents of the Palms Residential Park with their administrative problems, while being involved in the organisation of social activities for residents through The Northern Carer and Playford Rural Support Group.

A volunteer in a variety of roles with the City of Playford, including via Home Assist, Bob is also active at the Virginia Institute, helping with transport and support, as well as working in the kitchen and maintaining a much-loved vegetable garden.

Bob volunteers for the Northern Carers Network and has been on the board of management for that organisation for the past eight years. He also drives the organisation’s carers’ bus.

The 2018 City of Playford Citizen of the Year has a thirst for life that appears as if it cannot be quenched and he is an excellent example of our region’s can-do attitude.

Young Citizen of the Year –

Emily Harman The City of Playford’s Young Citizen of the Year Emily Harman is a Playford Youth Advisory Committee member who has seen significant personal growth through her community role.

The 19 year old is a pivotal part of the Playford YAC and is also establishing a local Rotaract branch to empower students and young professionals to create change in their local communities.

Emily is a passionate person who challenges herself to be the best person she can be and is doing great things in the Playford Community to ensure the area’s other young people have access to youth friendly events.

During her time on YAC Emily has volunteered at Youth Week, mental health forums, homelessness projects, Carnival in the North, the Playford Christmas Pageant and the Happiness Cycle project, among other things.

She has also been a strong leader at Northern Areas Secondary College, sitting on the Governing Council and led the student organising committee.

Emily has a positive attitude, a passion for her community and a great sense of humour that makes her an appropriate winner of this award.Community Group of the Year -

Dedicated to providing group support activities for residents of the Palms Residential Park at Waterloo Corner, as well as the wider community, the group cares for the older members of the park, particularly those unable to drive.

It provides lunches and a community newsletter, as well as running outings with buses provided by the City of Playford and Northern Carers.

The group’s latest initiative is the monthly ‘See the Sights of Playford’ tour, allowing residents to get out and about in the wider community. Group members also volunteer their time at the Virginia Institute with the Friday Group Rural Program, supporting elderly residents in this part of the Council area, while the group is also highly supportive of the Northern Carers Group.

Sports Club of the Year -

In its most recently completed season, the club’s under 12 and under 16 teams won their league titles, while the Downs, significantly, won the Premier A League double, as well as the Premier B League championship.The club has seen much success in recent years, providing opportunities for all juniors and seniors to participate in the best possible sporting environment.

The Downs’ committee and volunteers provide all participants a safe and inviting environment and the Downs is currently undergoing an assessment to become an accredited STARCLUB, an Office for Rec and Sport program, to ensure its operation and governance is optimal.

The club is believed to be the first accredited STARCLUB in the City of Playford.