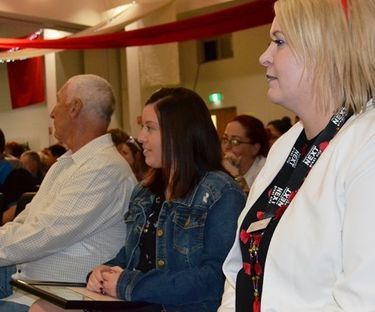 Share this article
Role models from a variety of fields were recognised at the recent International Day of Disability Mayoral Awards hosted by the City of Playford.

Role models from a variety of fields were recognised at the recent International Day of Disability Mayoral Awards hosted by the City of Playford. ^^ Rebecca Holloway (centre) was among the winners at this year's Celebration of Ability. Photo: Rob McLean Four awards were presented by Mayor Glenn Docherty at the annual Celebration of Ability that saw members of the community come to together to be entertained and to honour some amazing Playford contributors.

A former Xavier College student, Rebecca finished school with a Certificate II in Aged Care and volunteered with the City of Playford, driving the Playford Friends Program bus.

Rebecca is now employed as an in-home aged-care support worker, meaning she no longer receives the disability support pension.

A role model to students at her former school, Rebecca regularly speaks at Xavier and, at a recent event, year 10 students called her “their idol”.

As chief executive, Judy works tirelessly to ensure Lolly Jar’s success, single-handedly managing the organisation while ensuring all of the organisation’s trainers and volunteers feel appreciated and valued.

Running Lolly Jar Circus is totally altruistic, with Judy always putting herself last and passing praise on to others.

Over the past 12 months, the program has also expanded to include anyone in the community who may need it.

The 10-week program increases people’s basic cooking and kitchen skills, thereby improving health and wellbeing, whilst building their confidence and their contribution to the family home.

The Better Pathways Program supports students and staff in the Banksia Unit at Craigmore High School, providing opportunity for students to be successful through work experience in Playford and the broader community.

The Better Pathways program gives clients access to support for the challenging transition to life after school.

At the start of the 2017 football season, a group of all-abilities footballers were homeless, with no club to represent, until the EPFC stepped in to support the players, who compete in the Adelaide Football League’s C7 competition.

Having never been involved in all-abilities football, the club ensured the players were welcomed, provided participants with guernseys and access to the entire club.

The Demons were handsomely rewarded when the team won the C7 premiership.

Finally, a very special award was presented on the night to City of Playford staff member Lee Norsworthy by the Reach Out Mums Group.

The mums, part of a support and skills development group for women with intellectual disability, recognised Lee’s contribution to their lives and her support in helping them build their strengths and develop networks.