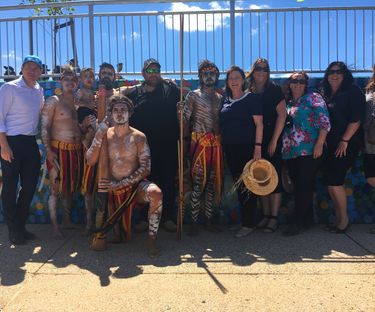 ​ A colourful art piece in a Blakes Crossing playground highlights Aboriginal culture.A blank wall spied from the classrooms of Blakes Crossing Christian College has brought a local community and Aboriginal culture together in a most colourful way.Whilst studying aboriginal art, year 6/7 students from the school decided an area known as ‘The Wall’, located on a neighbouring adventure playground, would be the perfect place for an art work. The elaborate art piece measures 70 metres in length and has turned a blank wall in a local playground to a colourful addition that has opened the doors for students to learn about indigenous culture. A $50,000 grant sourced by Anglicare saw local artist Scott Rathman commissioned to realise the students’ vision. Developers Lend Lease provided permission for the site to be painted, while the City of Playford provided additional support. The project, located on Kaurna land, has been totally embraced by the students, who drove the project and helped create the design, and have also recorded its progression, as well as planning Friday’s launch event. “The key element here is our learning. It goes beyond just this mural, children have developed an empathy and understanding of Indigenous Australians”, Aboriginal Artist Scott Rathman, said. “… and I have faith in these students to really drive change”. The City of Playford’s Mayor Glenn Docherty, who officially launched the mural, said the art work was an important cultural contribution to the community. “I want to take a moment to thank Blakes Crossing Christian College for immersing your students in learning about Aboriginal culture and sharing this knowledge with your school community,” Mayor Docherty said. “I understand it was during this part of your curriculum that some of your students asked a teacher if you could turn the new blank wall of the adventure playground into a mural.” The design, titled “The Wall”, stands proudly at the Blakes Crossing Community Oval, proclaiming that as the sun rises every day, it is a new opportunity for change in thought and action. Will you join?