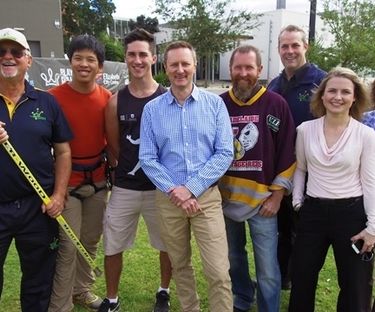 Share this article
From international events to local school programs - the Playford Arena will cater for everyone, from ice hockey players, to figure skaters and rock-climbers.

From international events to local school programs - the Playford Arena will cater for everyone, from ice hockey players, to figure skaters and rock-climbers.

For the first time in South Australia, the largest ever number of ice sports clubs and recreational associations have come together to give the Playford Arena the thumbs up.

Ice skaters, hockey players, coaches, elite rock climbers and former elite athletes all met at the $40-million Playford Arena site on Philip Highway at Elizabeth – calling it the most inclusive, ice-sports complex in Adelaide and the best facility of its type in the Southern Hemisphere. Here’s a taste of what they had to say…“We can open the doors for Australian ice sports and the best place to start is right here in Playford,” says Ice Factor program co-founder John Botterill.

“The Playford Arena will be the largest ice sports complex in the southern hemisphere,” he says.

“It’s fantastic and it means a lot to me as I grew up in Adelaide’s north and I’m proud of giving something back to Playford and the wider community.

“I’m also grateful to have the endorsement of an unprecedented number of ice sports clubs and community groups from across the state.”

One of them is former legend of the ice, John Botterill.

John has a passion for mentoring young people.

He coached the Adelaide Adrenalin ice hockey team as well as co-founding a program called the ‘Ice Factor’ – which started out helping troubled or disadvantaged kids from northern Adelaide gain self-confidence, new skills and camaraderie through ice hockey.

“…then all of a sudden those same kids were scoring goals and building their self-esteem. They’d go to school and look at their backers or bullies and say ‘Well you know what? I play ice hockey now’ and other kids would say ‘Wow, okay, that’s cool’,” he says.

According to John, there are currently 18 schools involved with the program but when the Playford Arena opens its doors as well as a southern suburbs facility, these types of social inclusion programs could easily expand.

“There’s something like 400 schools in Adelaide, so you know when you think of the possibilities there, we could create a social-inclusion program for schools in the north and in the south and they can have inter competitions and stuff like that, the mind boggles!,” he says.

In fact, John is convinced the Playford Arena can become the breeding ground for many future champions across a number of burgeoning winter sports.

“I think Australia can be a top five Winter Olympics country. We are producing amazing snowboarders and skiers - let’s produce some world champions on the ice as well, let’s walk away from international tournaments with a swag of medals, not just one or two,” John says.

“Our young people have the grit and desire, that Aussie tenacity…let’s now give them the opportunities and the facilities.”

However, he’s convinced the Playford Arena will change all that.

“This will be the only facility in Australia that meets all the criteria set out by the International Ice Hockey federation to host international World Championships,” Ryan says.

And with hosting events comes financial support from the Federation and tourism dollars.

“Most of the countries that we play against are based in Europe and so those teams would all come into Adelaide they’d be here about just over a week and they’d be in hotels obviously using restaurants and not to mention the people from across Australia that would come to watch the events,” Ryan says.

“We’ve seen from previous tournaments that we’ve hosted we get big crowds for that, so this would be a fantastic opportunity and a huge economic windfall for the sport and northern Adelaide as well.”

For those who don’t aspire to represent Australia at the next Olympics, the Playford Arena will, according to leisure groups, be a fantastic facility to take the family ice skating or rock climbing.

SA Recreational Ice Sports Association chair Jacqui Trigg says the best way to take ice sports to the next level is to focus on grass-roots participation.

“We need to encourage as many people as possible to take part – regardless of where you’re from, your background, your ability, your age or your competitive aspirations,” she says.

“Ice skating is like any other sport, it’s like tennis, footy if you don’t have that grass-roots participation and inclusion then people don’t have heroes to which they can aspire.”

The Playford Arena is due to start construction this year and be completed by December 2019.