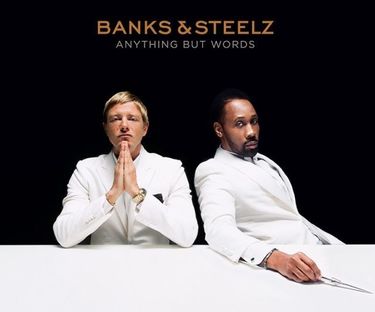 Share this article
&nbsp;The name may sound like a dodgy Wall Street investment firm, but Banks &amp; Steelz is anything but BS, despite some less than flattering early reviews.

The name may sound like a dodgy Wall Street investment firm, but Banks & Steelz is anything but BS, despite some less than flattering early reviews.A creation of Interpol’s Paul Banks and Wu-Tang Clan’s RZA, this is a partnership that has the potential to grow into something very interesting.The pair started off as chess partners and then put their creative minds together to create the album Anything But Words.Revelling in the grit of NYC and the frailties of intimate relationships, B&S have put together an album which cleverly integrates the sombreness of Banks’ work with Interpol and the urban grime that is so associated with hip hop, at the same time attempting to reclaim the rap genre for New York, New York.Giant is an outstanding opening, while the eighth track Love And War (feat the Wu’s Ghostface Killah) is the best track on the album – “If all is fair in love and war, what are we keeping score for?”In L&W, like Giant, Banks does not have much to do.But is that a bad thing? Every partnership sees a time where one of the instigators needs to take a back seat, and the fact Banks is forced to do so on these occasions does not necessarily harm the work.Wild Season sees the vocals of Florence Welch shine, while the title track Anything But Words is killah.Also guesting on the album are hip-hop icons Method Man and Kool Keith.Maybe, if this partnership is to work and produce more albums, it needs to rely solely on its key partners, drop the guest artists and allow both Banks and RZA to really shine on their own.If you’re seeking something new to listen to, definitely invest in Banks & Steelz, this is a business and artistic partnership that won’t let you down and has plenty of room for growth.Also spinning:The Hard Aches – I Freak Out: There’s plenty to like about Adelaide indie-punk rock outfit The Hard Aches and their six-track EP, I Freak Out, even if lead singer Ben David doesn’t sound like he likes himself too much. At times, the depression seeps out of the songs like a heavy shroud. But there’s enough here to make you listen again.Biffy Clyro – Ellipsis: This punk act from Scotland has come back with a new album, following its last, disappointing, release. If you’re looking for the Biff you know, you may be slightly miffed, as the trio has gone for a poppier sound this time around. This one may take a few listens.