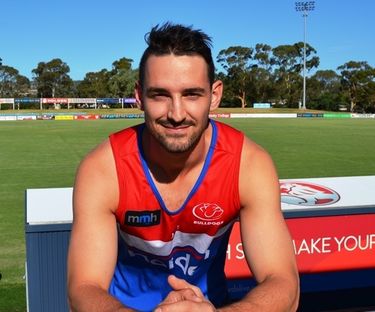 Former Port Adelaide AFL star John Butcher is thriving in his new home at SANFL club Central District. ^^ John Butcher is making the most of his move to the Ponderosa. Photo: Rob McLean Recruited from Victoria, having grown up in Maffra, Butcher spent seven seasons with the Power and experienced a career that never reached the heights predicted when he was picked at number eight in the 2009 draft.

While things didn’t quite work out at the highest level for Butcher (31 games/41 goals), his performances at SANFL level occasionally bordered on the dominant; a six-goal haul against Central District last season a reminder of his potential.

When Port coach Ken Hinkley ended Butcher’s AFL career, the KPP, understandably, had many offers from clubs keen for his signature – the Bulldogs won out.

“Once I’d decided SA, Centrals was the best fit.

“I think they’re in a great position, a young group, a really up and coming exciting group – they made finals last year and they only had a few things missing and I think we might have added those ingredients this year.”

Along with Butcher, the Playford-based club has also regained Jack Hannath (Fremantle) and former Elizabeth player Josh Glenn (Gold Coast), who both return to the club with AFL experience.

And while, as Butcher said, these players are critical ingredients as the club aims for a first flag since 2010, it is the talent already at the club that really excites him.

“Each of the young guys are another year older and there are some terrific onballers, like the Schiller brothers (Jarrod and Travis), Chrissy Jansen and Luke Habel and Luke Barmby off the half-back flank,” he said.

“It’s going to be an exciting year. I can’t wait to see how we measure up.”

Known as a forward, Butcher, at times, played ruck or defence with the SANFL Magpies, prompting speculation he may take on a similar role at the Ponderosa.

However, Butcher said veteran coach Roy Laird has him locked in as a forward, working in tandem with young tall Connor McLean, who’s due for a break-out year.

“Hopefully, I don’t have to have too much of a run in the ruck, because it’s not my favourite position; but I think we’re going to have one of the best ruck duos in the league, with Hannath and Darcy Fort."

After his time in the AFL system, this year was always going to provide a challenge for Butcher as he transitions from full-time footballer.

“I thought (coming from the) AFL, being full time, it would be more of a drop (in training requirements), but Roy’s an old-school taskmaster and works the boys pretty hard, so it’s been an interesting transition,” he said.

“It’s taken a little bit of time getting used to working full-time hours during the day and then coming and trying to fit in a solid session - as much as we used to do in one day at Port across two or three hours.”

Off the field, Butcher has followed a professional career path.

“I’m with Red Wealth doing some investment planning, we specialise in investment properties, and are based in Kent Town,” Butcher said.

“I’ve always had a passion for finance and now I can take that on full time.”

While investment is his game off the field, Doggies fans will be hoping Butcher, who kicked 37 SANFL goals last season, will bring premiership riches in 2017.

The Dogs’ SANFL campaign kicks off on April 8 when the club hosts Woodville-West Torrens. Other stories: