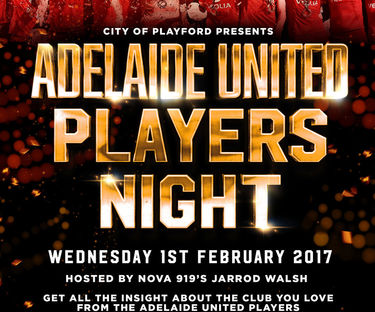 The City of Playford presents the inaugural Adelaide United Players Night. Book your tickets! Adelaide United fans have a rare opportunity to hear about the club from those in the know – the players – at the inaugural Players Night next month.Appearing at the February 1 event will be Reds skipper Eugene Galekovic, defenders Tarek Elrich, Dylan McGowan, Jordan Elsey and recently re-contracted midfielder Isaias.

The intimate and unique experience will provide an opportunity to hear Adelaide United’s stars about life as a professional footballer, last season’s thrilling championship double and the 2016/17 season.

The inaugural event will be held at the Playford Civic Centre Function Rooms and hosted by Jarrod Walsh from Nova 919.

Doors open at 6:30pm for a 7:30pm start and bar facilities will be available on the night. Adelaide United Players Night