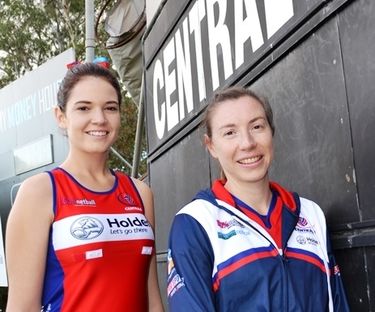 Share this article
A new name has given a local netball club a greater push towards regaining its place in the sport’s top flight in South Australia.

Club president Karen Edwards said the alliance has proved beneficial to the Adelaide Metropolitan Netball Division club, which has made its home base at the CDFC’s Grand Central facility, and its aim to return elite netball to Adelaide’s north.

“We’ve attracted a lot of new players and coaches, which is what we wanted to do.”

While the club hopes to return to the Premier League in coming years, Harlequins (in the traditional purple colours) will still play in the Elizabeth Netball Association.

The Central District alliance enables the club to target players from across a broader area.

“What we want to do is attract talented players from the northern regions, as far as out as Port Wakefield, the Barossa and Mallala, back through to Mawson Lakes,” Edwards said.

“We just want to give the players from the northern suburbs and areas a chance to play at the elite level and we want to make it affordable.”

The CDFC is delighted by the alliance, which it says links women’s and men’s sport, while increasing the use of Grand Central.

Edwards said the club has 13 teams playing in the Adelaide Metro competition, including an All Abilities team, while it also has links with Playford International College and its netball academy, providing further opportunities for talented northern players.