A memorial for Harry 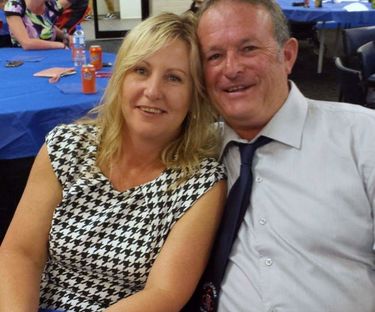 Share this article
A Playford sporting favourite has been immortalised in a local park, honouring his contribution to cricket and the local community.

A Playford sporting favourite has been immortalised in a local park, honouring his contribution to cricket and the local community. ^^ A tribute to Paul 'Harry' Harrison, pictured with his wife Roslyn, has been placed in a local reserve. Photo: Supplied “Can’t bat, can’t bowl, but it’s the spirit in which you play the game that is important.”

“It’s a beautiful bench…where members can go and reflect about one of Craigmore CC’s best,” Mr Curry said.

One year ago, the 54-year-old father of two suffered a heart attack shortly after batting for his beloved club in a Para Districts Cricket Association game.

Despite the efforts of paramedics at the scene, he passed away shortly after.

Harry’s death shocked northern Adelaide’s cricketing community, in which he was regarded as a ‘gentleman of the game’: friendly, enthusiastic and a mentor to junior players.

He would often tell young cricketers that “you can’t control the ability you have, but you can control the effort you put in”.

Harry played 188 games for Craigmore over 20 seasons and was also a much-loved member of the Central District Football Club.

Last Sunday (February 19) the memorial bench was unveiled at the reserve on Uley Road, the scene of so many of Harry’s cricketing triumphs. ^^ The bench, located at Uley reserve, features a plaque bearing one of 'Harry' Harrison's favourite cricketing quotes. Photo: Glenn Docherty Mr Curry said the unveiling ceremony was very emotional.

“Initially, we considered playing our T20 tribute game against ATCO at Uley, however some just couldn’t play there, they were too emotional and we moved the game to Argana Park,” he said.

City of Playford Mayor Glenn Docherty attended Sunday’s memorial and said it was an honour to be present for the occasion.

“Harry was a well-known member of our community and it is people like him who are the heart and soul of not only our sporting clubs, but the north,” Mayor Docherty said.

“This is a wonderful way to honour his memory and I’m sure the bench will be a point of reflection and provide the opportunity to watch future generations of cricketers, which I’m sure Harry would be happy about.”

The bench was donated by the City of Playford.