A match 20 years in the making: Best of frenemies 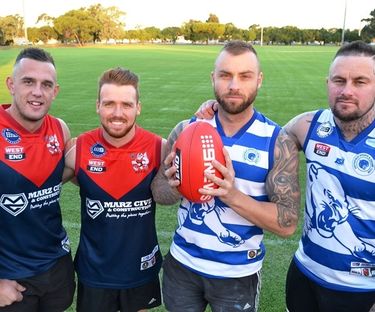 Share this article
An old local football rivalry will be revisited for the first time in over 20 years this Saturday, when northern neighbours Eastern Park and Smithfield play each other.

An old local football rivalry will be revisited for the first time in over 20 years this Saturday, when northern neighbours Eastern Park and Smithfield play each other. ^^ Eastern Park's Chris Knapp (left) and Peter Diedrichsen, with Smithfield's Scott Webber and Ricky Nisbett, are geared up for this weekend's first match between the clubs in 20 years. Photo: Rob McLean The Demons and Panthers last met in about 1996, just after the clubs joined the SAAFL, having transferred from the disbanded NMFL (formerly CDFA).Since then, the clubs have gone their different ways, with Eastern Park rising as high as division one, while only four seasons ago Smithfield faced extinction, with just one team.Eastern Park coach Scott McGee remembers the strong rivalry with fondness and is keen to see it rejuvenated. “It takes me back to the old CDFA days,” McGee laughed.“When you played back in those days you got to know the blokes – they were enemies on the field, but mates off it.“The local derbies were always good.” Smithfield stalwart Mark Lord has watched his club receive three consecutive promotions, winning two premierships along the way, and said the rivalry match will be a good test of the Panthers’ status in division four.“This game is going to mean a lot, to see where we are at, as Eastern Park are meant to be one of the better sides,” Mr Lord said.“Most of the guys know each other, so it’s going to be good fun.”This weekend’s game will be played at Thebarton Oval from 2:15pm. The season so far:

Panthers defeated top side CLG for first win in round four.

Demons followed up to defeat CLG in round five.