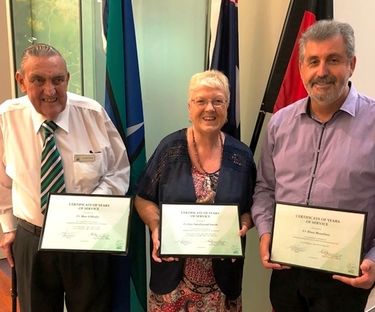 Share this article
A combined 70 years of service to local government was recently recognised by the City of Playford.

Each of councillors O’Rielly (Elizabeth) and Smallwood-Smith (Munno Para) began their contribution prior to the amalgamation of local government areas that saw the creation of the City of Playford.

Has been a member of Virginia Horticultural Centre management board, SA Produce Markets director, founding board member of the first Bendigo Community Bank outside of Victoria, Hortex Alliance chair and Deputy Mayor.

Cr O’Rielly has served on many committees, including the Economic Corporate Committee, Governance Review Committee, the Gawler River Floodplain Management Authority and served on the Murray Darling Association for 18 years.

Having three water tanks installed under the Playford Civic Centre, known as ‘O’Rielly’s Tanks’, to assist with water conservation and usage.

Meanwhile, at the same meeting, Councillor Smallwood-Smith was elected as Deputy Mayor for the remainder of the current term of Council.