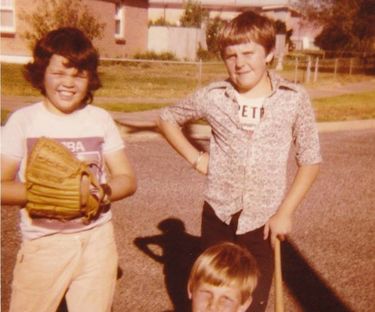 Craigmore resident Danny Hubbard recently received a photo that revived long lost childhood memories. His recollections would ring true with many who grew up in Adelaide’s north in the late 1970s, so we thought we’d share them. ^^ Danny Hubbard, wearing his favourite ABBA t-shirt, with his old friends Peter (top right) and Tony Sheppard, playing in Cockshell Street, Elizabeth Fields. Photo: SuppliedIt’s funny how much of your past gets forgotten as you get older and work and family life becomes a priority.

The games you played and the people you played them with are all behind you without a thought, until something unlocks your memories.

Recently, my old mate Don Pearce sent me a photo of myself and his brothers-in-law Peter and Tony Sheppard, who were my best friends up until I was 11 years old.

The photo was taken at Cockshell Street, Elizabeth Fields, now called Davoren Park, where I lived across the road from Peter and Tony before my family moved from to Wimborne Street in the Downs.

Unfortunately Tony, the younger brother at the bottom of the photograph, passed away this Easter after a battle with the dreaded cancer - he was only 48.

But after viewing this photo, the many thousands of moments I had shared with these two all came flooding back, like it was yesterday.

We would follow the creek along Stebonheath Road all the way to Smithfield and act like it was a million miles distant.

We'd ride our bikes and tow each other on our skateboards and pretend we were water skiing. We had stone wars in the creek and I remember Tony hitting me in the head with a huge rock that left a lump the shape of Ayers Rock, as it was called then, on my forehead.

We were so scared to tell Mum that we blamed a “big kid who ran away”, just so we didn’t get into trouble.

The number of times we missed meals because we were down at the creek - too busy building forts and stuff to go home - were too many to count.

We would knock on people’s doors and then run away.

I hated ABBA - I was a Sherbet fan back then – but had to wear the shirt because Mum bought it for me.

5113 - good times, great memories.As Richard Dreyfuss says at the end of the coming-of-age movie Stand By Me, “I never had any friends later on like I did when I was 12. Does anyone?”

We all have these memories locked away, this photograph was the key to unlocking many for me. Thanks, Don, for sharing it. Danny Hubbard Danny grew up in Playford, playing cricket for Elizabeth and One Tree Hill and footy for Eastern Park. Strangely, he’s a Glenelg supporter. Danny still lives in the north and, now, rather than riding skateboards his favourite mode of transport is his Mini. If you have a story to share about your childhood, contact the City of Playford via Facebook or email playfordnews@playford.sa.gov.au