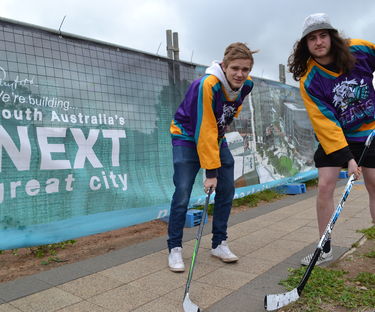 Share this article
Local teenagers Jayden Watts (left) and Ayden Lonnie are excited by the proposal to build an ice sports and entertainment facility as part of the City of Playford's CBD of the North development.

Local teenagers Jayden Watts (left) and Ayden Lonnie are excited by the proposal to build an ice sports and entertainment facility as part of the City of Playford's CBD of the North development.

THE residents of Playford have given a very warm welcome to news that an ice-sports arena is to be built at Elizabeth.Cruachan Investments, which will build the facility under the name Ice Rinks Adelaide, announced in September that it would be launching a $35 million investment into a sports, entertainment and dining facility as part of the City of Playford’s Smart City development.The double-rink facility is proposed for the corner of Main North Road and Philip Highway and will seat up to 3200 spectators for ice hockey, or up to 3900 for major music concerts.The centre also features a 450-seat restaurant and 400-seat function room and the highest rock-climbing walls in Australia Local teenagers Jayden Watts and Ayden Lonnie are excited about the proposal, which they believe will have benefits for many within the community.The Northern Adelaide Senior College students have been involved in the Ice Factor program, which helps students develop vocational and life skills in a team.Ayden continues to play the sport for the Blackhawks and described the proposed facility as an amazing opportunity to bring a new recreation choice to the region.“I think it would be good, because people who want to ice skate, their parents might have an issue with them going into the city alone, I think if they’re close to home, it would be better,” Ayden said.Jayden also added that the opportunities for jobs and entertainment in the northern areas of the city will be welcomed by young people, as well as their families.

Community excitement Cruachan Investments director Stephen Campbell said the community was excited by the proposal.Following the announcement of the facility, a 10 Eyewitness News story posted online has been immensely popular.“The fact that we had more than 71,000 views online shows that there’s considerable interest in Playford and across the state,” Mr Campbell said. “I think this is just the start of the interest.”Mr Campbell said the facility will be a great entertainment focal point for the north and is expected to attract national and international sporting events, including world championships in ice sports and rock climbing.“People are starting to realise that it’s not just an ice rink,” Mr Campbell said. “It’s a significant building, which will be more than rock climbing and ice sports, it will be the second largest multi-purpose facility in SA, behind the Entertainment Centre.”Mr Campbell said the City of Playford’s CBD of the North proposal is very exciting and is going to produce significant benefits for the area and the state.It is hoped the sports and entertainment arena will be opened in March, 2018.