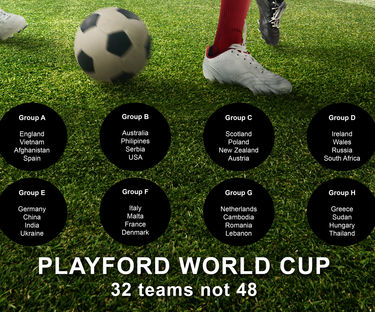 Share this article
Based on demographics, which countries would make football's Playford World Cup?&nbsp;^ If there was a Playford football World Cup, here's how the teams would line up in a 32-team competition.

Based on demographics, which countries would make football's Playford World Cup? ^ If there was a Playford football World Cup, here's how the teams would line up in a 32-team competition.

News that FIFA is set to expand football’s World Cup from 32 to 48 teams in 2026 has caused much debate among sports fans.

FIFA’s decision prompted us to have a look at the City of Playford’s demographics to see if we could field a 48-team World Cup amongst our community.

As has always been the case, the City of Playford has a large population of residents who claim ancestry from another nation.

Unsurprisingly, the latest figures (2011) from the Australian Bureau of Statistics show that more people in Playford claim English ancestry than from any other nation – 35,612 (up 4.5% from 2007).

People claiming Scottish (6402) and Irish (5333) ancestry come next, giving them entry into the City of Playford World Cup.

The highest-ranked non-European country to make the Playford World Cup is football minnow Vietnam (725), followed by the Philipines (622).

The highest-ranked African nation was Sudan (365), coming in at number 16 on our ancestry list.

However, while we have a large number of nations represented across our Council area, there was no way we could field a 48-team tournament – maybe FIFA should take note – so we’ve decided the Playford World Cup will be restricted to 32 qualifiers.

Unfortunately, due to the 32 team cut-off, regular World Cup participants Turkey miss out on the Playford tournament by one spot.

Check out the Playford World Cup entrants and their local population figures (with current world team rankings) in the list below.