20 jaw-dropping entries for the Royal REVolution Competition this weekend 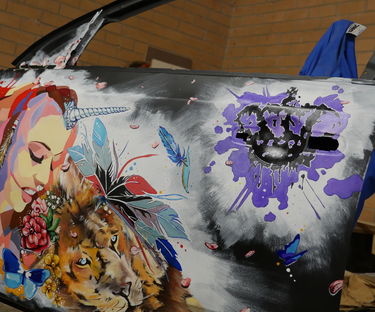 Share this article
There aren’t enough superlatives to describe the art that will be on show in The Lion and the Unicorn Exhibition at the Playford Palace this weekend.

There aren’t enough superlatives to describe the art that will be on show in The Lion and the Unicorn Exhibition at the Playford Palace this weekend. The Lion and the Unicorn Exhibition is a feature of the Playford Palace Fringe Festival event being held at Elizabeth and features nearly 20 eye-catching and jaw-dropping pieces of art crafted on car doors.

Reflecting the themes of royalty and fantasy, the doors display a variety of mediums and have been brought to life with car parts, forks, paint – you name it.

Local residents and artists from across the state have entered the exhibition, hosted by the City of Playford.

Mayor Glenn Docherty said the artwork will certainly amaze those who view the exhibition.

“We’ve got some great creative people here in Playford and this is a unique way that we can pay homage to Holden in our local community and local people can do their artwork on something a bit nifty, but, most importantly, they can show their energy and talent,” Mayor Docherty said.

Local artist Amy Fairweather said the ‘canvas’ of a car door proved an enjoyable challenge and she’s looking forward to seeing the other creations.

“My artwork is a fusion between the Tudor Court and fantasy and I decided to paint a dragon to represent strength and the queen to represent gentleness,” Fairweather said. ^^ Royal REVolution competition entrant Amy Fairweather with her car door art piece

“I’ve never drawn on a car door before, so it was quite daunting to put pencil to car door, even the materials, so I do remember just sitting there for a couple of days just staring at it, but I just had to go for it.”

On offer to the artists are several prizes, including up to $1500 in cash and a Holden loan car for two weeks.”

Mayor Docherty is on the judging panel for the awards, which will be announced at the Playford Palace this weekend.

“I think it’s going to be a really, really hard job to decide who is going to be the King and Queen and Northern Crown and Kaurna Shield winners as part of the Fringe Festival here in Playford,” Mayor Docherty said.

To learn more about the Playford Palace, click here.